UPDATE (2/14/2013): I've put together yet another list of rare and lost regional horrors. See the new batch here!


Many regional horror films are justifiably obscure; they received limited release in theaters or on video, and in some cases were only distributed in a handful of states. There are a handful of films, though, that are beyond obscure -- mysterious movies that seemingly exist only by way of myths, rumors and a handful of rare posters.

Below I've listed what I consider to be the rarest regional horror films ever made. Some may yet turn up on video (one, in fact, already has), while others have probably vanished forever. I've managed to see two of the 14 films, and I have a line on at least a couple of others. Have YOU seen any of them? Do you think you've uncovered an even MORE obscure regional horror? Leave a comment!

The Weird Ones (1962)
Filmed In: Texas
Director: Pat Boyette
Status: Lost
All copies of this oddball sci-fi flick from comic artist, screenwriter and TV personality Pat Boyette were destroyed in a garage fire. Boyette's other horror film, the leprous Dungeon of Harrow (1964), however, is available on almost every public domain DVD set ever released, which I guess makes it the opposite of a lost film.

The image above comes courtesy of the folks at Comicartville.

Demon from Devil's Lake (1964)
Filmed In: Oklahoma
Director: Russ Marker
Status: Lost
This notorious phantom film was set to be the follow-up to Marker's Texas-lensed Nazi time travel epic The Yesterday Machine, but according to Marker the investors ran out of money and Marker himself ran out of patience before the film was completed, making it probably the rarest of these rare films in that it is not only lost, but also incomplete.

However, producer Don Phillips' wife Laurie turned up over at the Classic Horror Film Board claiming that the film was mostly completed, and that Phillips had handed it over to Larry Buchanan, which could explain why frequent Buchanan collaborator James Sullivan wound up remaking it as Night Fright. So the mystery deepens. At any rate, actor/singer Bob "Git It" Kelly gave me copies of the two rockabilly songs he wrote for the film, so at least I have an idea what the movie may have sounded like.

The Devil's Sisters (1966)
Filmed In: Florida
Director: William Grefe
Status: Lost
This true-crime/white slavery pic was based on the real life case of the Gonzales sisters, who murdered several dozen women in Mexico while running a prostitution ring.

You can see some nice advertisements for the film over at The Temple of Schlock.

The Transformation (A Sandwich of Nightmares) (1974)
Filmed In: New York
Director: Lewis Jackson
Status: Lost
Before making the psycho tour-de-force Christmas Evil (1980), Lewis Jackson directed the softcore film The Deviators (1970) and this peculiar experiment about a sex cult, book-ended with behind-the-scenes footage of the production. According to Jackson, he used to own a print of Transformation, but his ex-wife took it. If anybody knows Jackson's ex-wife, ask her to go through her garage and rescue this piece of history!

Again, the fine folks over at The Temple of Schlock have provided some imagery.

Banned (1989)
Filmed In: New York
Director: Roberta Findlay
Status: Unreleased
Unfortunately, Roberta Findlay's final feature as director (which includes an early appearance by Debbie Rochon) was never released in any form. It's about a jazz guitarist that's possessed by the ghost of a dead punk rocker.

Silent Death (1983)
Filmed In: New Jersey
Director: Vaughn Christion
Status: Unknown
Details are sketchy about this masked vigilante film that may or may not have horror overtones, but the Gore Gazette gave it a scathing review after what was probably its only theatrical engagement at the Paramount Theater in Newark, N.J., on a triple bill with Maniac (1980) and An Eye for an Eye (1981). 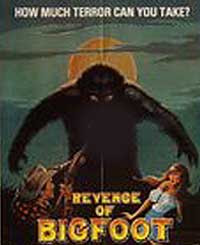 Revenge of Bigfoot (Rufus J. Pickle and the Indian, 1979)
Filmed In: Arkansas
Director: Harry Thomason
Status: Unknown
This one concerns a bigot, an Indian and a sasquatch, but I can't tell you much more beyond that because it appears to have vanished off the face of the Earth -- unless Thomason himself has a copy. Thankfully, several members of the cast have posted their memories over on the Internet Movie Database.

The Naked Witch (The Naked Temptress, 1967)
Filmed In: New Jersey
Director: Andy Milligan
Status: Lost
One of Milligan's earliest period pieces, this lost film is frequently confused with Larry Buchanan's The Naked Witch (1964), which is available on DVD from Something Weird.

The Wednesday Children (1973)
Filmed In: Ohio
Director: Robert D. West
Status: Limited Availability
We covered this pseudo-religious cautionary horror film here. Unless you are a frequent viewer of Wadsworth, Ohio, public access station WCTV, or you live in my house, odds are you'll have a hard time seeing this one.

The Beast From the Beginning of Time (1965)
Filmed In: Kansas
Director: Tom Leahy
Status: Limited Availability
Popular horror host Tom Leahy (a.k.a. The Host) made this film in Wichita along with his cohorts at KARD, but it remained unseen until it debuted on local television in 1980. Since then, the film turned up as an episode of The Basement Sublet of Horror, and that show's host Gunther Dedmund was gracious enough to let us view it. If you really need to see Leahy in action, check out King Kung Fu (1976).

Sasqua (1975)
Filmed In: Massachusetts
Director: Channon J. Scott
Status: Limited Availability
We first learned about this obscure Bigfoot movie over at the Temple of Schlock, and the folks over at Cult Reviews provided some more detail on their site. Channon Scott (who also had credits on The Black Angels and Dolly Dearest) claims to have a copy of the film, and other copies are allegedly floating around. There's also this clip on YouTube: 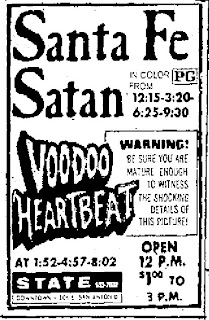 *UPDATE: A careful reader reminded us (see comment below) that dogged researcher and author Stephen Thrower (his "Nightmare Movies" may be one of the most important texts on horror films generated in the past 20 years -- seriously) has located a print of Voodoo Heartbeat in the UK, and a thorough dissection is expected in Volume 2 of "Nightmare Movies."

The Hackers (1987)
Filmed In: Michigan
Director: John Duncan
Status: Available!
Rare shot-on-video slasher film about crazed, murderous handymen. According to The Bleeding Skull, it was never distributed outside the Midwest. The film's production company, Camelot Studios in North Street, Mich., has done us all a favor and added a page dedicated to their lone horror opus here. Although Camelot now offers the film on DVD, I've included it on the list because, until recently, it remained so obscure.

Blood Circus (1985)
Filmed In: Maryland
Directors: John Corso, Joseph Ryan Zwick
Status: Unknown
We previously covered the origins of this aliens vs. wrestlers flick here, as well as providing an update on the life and legend of unrepentant former infomercial huckster Santo Rigatuso, a.k.a. Santo Gold, a.k.a. Bob Harris. Santo claims to have discovered the previously lost masters and 35mm negative for Blood Circus. Until he finds a distributor, you can order a copy of the "Making of Blood Circus" from his Web site.
Posted by The Dead Next Door at 6:00 PM