Where the Heck are the Aliens? 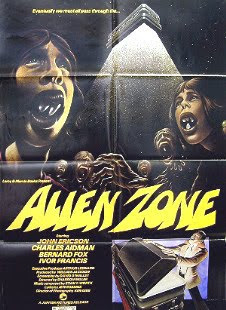 Alien Zone (1978)
Stillwater, Oklahoma
Released the same year as John Carpenter's Halloween, Alien Zone (a.k.a. House of the Dead) is one of just a handful of American omnibus films from the 1970s that has become a staple of public domain DVD collections. The title is a non-sequitur; there are no aliens. Instead, it's a straightforward, EC Comics-style presentation with a ghoulish mortician relaying four stories to a philandering conventioneer who has wandered into his funeral home during a rain storm. Unfortunately, the film never matches the effectiveness of the opening segment (about some Halloween-masked, candy corn-fanged kids terrorizing a grumpy school teacher).

Alien Zone is also one of the few genre items of that era (or any era, for that matter) directed by a woman. Oddly, none of the articles I've found about the movie mention director Sharron Miller. Miller was an Oklahoma State University grad who went on to a successful career in television, making it doubly strange that even the local press failed to profile her.

Oklahoma City -- Hollywood, look out. Moviemaking has come to Oklahoma.

"We can do anything here we can do in California," said Oklahoma movie producer Arthur Leonard. "I'm trying to start an excitement here... I want to bring the film and TV industry to Oklahoma."

Leonard, who has completed work on one movie and hopes to produce at least five more in Oklahoma, said the state offered moviemakers low production costs and a variety of settings for films.

"Five Faces," a fantasy thriller about five corpses that come to life, cost $600,000 to film in the Oklahoma cites of Stillwater, Ponca City and Yale last November and December, Leonard said.

Making the same film in California would have cost at least $1.2 million, the producer said.

"People here let you use their facilities for less," Leonard said.

An example, he said, was a hospital that charged only $50 per day to be used as the scene of filming for "Five Faces."

Leonard's film company, Myriad Cinema International, is based in the heartland of Oklahoma wheat country, the city of Enid.

Enid, with a population of about 45,000, became the movie capital of Oklahoma because it is the home of Leroy and Marvin Boehs, two oilmen who've agreed to supply $500,000 in financing for each of six Myriad films, Leonard said.

There are also smaller investors in the company.

"If you make a fairly good film, you can't have a dry hole," Leonard said, turning to oil industry terminology to describe what he considers the bright financial outlook for Warner Brothers and Columbia Studios, but always on B-grade films, he said.

Leonard moved to Oklahoma seven years ago for a land promotion, and has since been engaged in writing and public relations work.

"I like this state because here I could be No. 1" among movie producers, Leonard said, since no other feature film companies are headquartered in Oklahoma.

In Oklahoma, "You're not governed by studio bosses, you're doing your own thing. The only thing that's lacking here is a studio," the producer said, but he has plans to change that.

Myriad expects to turn a Stillwater armory into a studio in September.

"Five Faces," starring John Erickson, is scheduled to be released this summer.

Over 200 Attend Bow of 'Alien Zone,' Enjoy Bizarre Evening in Stillwater
STILLWATER, OKLA. -- About 200 curious people withstood pouring rain outside the Aggie Theatre here Tuesday night (14) for a chance ot attend the world premiere of a locally produced horror film, "Alien Zone," writes Mark Weatherford for the Daily Oklahoman. His story is quoted, in part, below.

Ceremonies outside were shortened by the rain, forcing the film's executives and honored guests -- who arrived in a funeral hears and limousine -- to make a quick run inside.

Once inside, however, spirits were restored as patrons shook hands with the filmmakers who expressed happiness with the turnout despite the rain.

"We planned it this way so it would match the first scene of the movie," laughed executive producer Arthur Leonard of Oklahoma City.

"This really tells me something about Oklahoma's spirit," said Australian-born Richard Cassidy of Jupiter Films, distributor of the movie.

To herald the beginning of the movie, a scaled-down funeral procession complete with trumpets, drum, pallbearers and casket, marched down the aisle of the packed theater.

The film is a five-vignette anthology of a horror story linked together by the tales of a strange mortician told to his unexpected guest on a rainy night.

Originally shot under the title "Five Faces of Terror," the movie was filmed in Stillwater last November and December, with additional scenes shot in Ponca City and Yale.

The film originated when Leonard, a retired Hollywood filmmaker, and William Jackson, an OSU broadcasting and film instructor, decided to capitalize upon the availability of non-unionized OSU broadcasting students as well as the enthusiasm such a project would generate.

After gaining the financial support of Enid businessmen Leroy and Marvin Boehs, Leonard began work as executive producer for the $685,000 film, produced under the name of Myriad Cinema, Inc., Oklahoma City.
Posted by The Dead Next Door at 6:00 PM