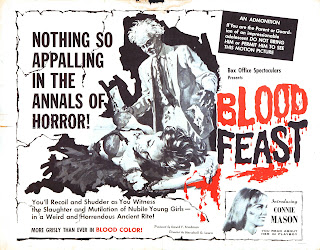 This summer will mark the 50th anniversary of H.G. Lewis' groundbreaking gore film Blood Feast. I'll be posting a number of trade press items about the film from that period over the next few months, leading up to the "official" anniversary date in July. In the meantime, I thought I'd post some other items related to regional horror film production in 1963 as well.

It was that year, for example, that a number of tax incentives went into effect that helped spur independent film production in general (and regional film production specifically), and you can see a steady increase in indie film output from that year forward until the tax breaks were eliminated in the 1980s. 1963 also marked the debut of key early works from the likes of Larry Buchanan, William Grefe, Bill Rebane, and other regional horror stalwarts.

Below I've gathered a few items from BoxOffice magazine's May 1963 issues that are related to some of those filmmakers. To put things in context, in 1963 Hollywood was facing declining attendance numbers as television gained a greater foothold in American households. Films deemed too violent or racy were still subject to bans from local censor boards and attacks from women's groups and the Catholic Legion of Decency. Many theaters (particularly in the South) were still segregated. Blood Feast arrived at a time when the American horror market was dominated by low-rent Psycho knock-offs and Roger Corman's Poe series, but far from Hollywood a new group of filmmakers was starting to emerge that would take the genre in new, and often exceedingly odd, directions.

Invasion of the What?

The May 13, 1963 edition of BoxOffice included this nugget, which refers to two early Del Tenney features (Invasion of the Zombies was actually the working title of Horror of Party Beach). The same issue indicated that Tenney's partner, Alan Iselin, was expanding his theater chain, snapping up drive-ins in Florida and New York.

NEW YORK -- A new company, Iseling-Tenny Productions, has been in existence about four months and has turned out two feature films, "The Curse of the Living Corpse" and "Invasion of the Zombies" at Stamford, Conn.

The company is headed by Alan V. Iselin, an upstate New York and Florida theatre owner, and Del Tenney, a former stage and television actor, who serves as producer-director.

Complete merchandising manuals rather than the usual press books will be prepared for each picture and combination, Iselin said.

Ted Spiegel, former advertising-publicity director for Kingsley International Pictures and for Union Film Distributors, has been named vice-president in charge of advertising, publicity and merchandising for the new company.

Approximately two pictures a year are planned by Iselin and Tenney. In preparation are "Airlines Stewardesses" and "Ski Weekend." 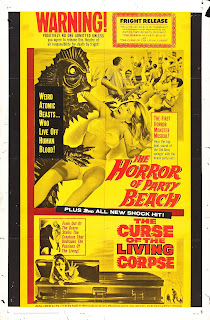 1963 was the year of PT 109, Cleopatra, Bye Bye Birdie, The Great Escape, The Birds, How the West Was Won, and From Russia With Love. But one of the films nabbing BoxOffice headlines (and raking in a lot of cash) was Larry Buchanan's controversial Free, White and 21. The film, distributed by American International Pictures, was a courtroom drama (based on a true story) about a black man accused of raping a white woman, and was successful enough to establish an ongoing relationship between Buchanan and AIP that eventually resulted in the production of a slough of cheap made-for-TV monster movies.

A key part of the promotion of the film involved providing paper ballots to audience members so that they could serve as an ad hoc jury. Part of the film's ad campaign in Boston included call-in voting. The number in the Boston advertisements led to an answering service that was soon swamped with calls. According to BoxOffice May 20 issue:

"So great was the curiosity that the Copley exchagne in downtown Boston was inoperative due to the preponderance of the calls. At one time the load was so great that the telephone company had to change the downtown office exchange to a 'Devonshire' number.

"A count revealed 5,572 calls on one day, a record for such a device ... the machines broke down twice and had to be repaired due to the curiosity aroused by the subway posters and billboard posters." 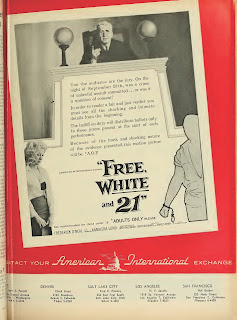 MIAMI -- A new motion picture company has been formed here under the name of "Flamingo Productions, Inc.," with Irwin and Herb Myers as producers. The two brothers have been in the construction and real estate development business here.

"Miami Rendevous," a romantic adventure, will be their first picture, and shooting has started on locations in Miami and Miami Beach. It will be a full-length feature in color, with Hal Carrington as camerman.

Gloria Izzo is handling coordination and casting and the lead roles will be announced soon. An all-Miami cast is being assembled.

As far as I can tell, this film was released as Passion Holiday, and featured Christy Foushee (a.k.a. Blood Feast's Toni Calvert), Linda Hall, Yanka Mann (who appeared in several Florida-lensed horror films), and Stella Palma in the cast. 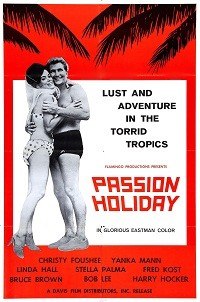 Also in the news on June 3:

Producer-director Bill Rebane, with a revised script, is trying to get police cooperation from superintendent O.W. Wilson in shooting Loop scenes for his sciece fiction movie, "Terror at Half Day." Hollywood producer Doc Stanford is Rebane's new partner.

The June 3, 1963 issue also lists Carnival of Souls as a current release from Herts-Lion International, even though that film was already a year old at the time.